Who would expect that a television would be highly improved these days. It seems that a flat plasma, LCD or LED are not enough improvement. And it seems that a personal computer is not enough to cater the demands of virtual socializing. If mobile phones have gone smarter, so are the televisions. You connect to social media on the go through smart phones but how about turning it off when you’re lying on your couch in front of your TV and update your social media status with your remote control while you’re watching your favorite show. You can do this with a smart TV like Samsung’s. It’s called Samsung Internet@TV before or when we purchased it a year ago but the latest models now bear the so-called Samsung Smart TV. Furthermore, these models have better screen interface with a browser for easy website navigation. The Social Hub and other apps are also enhanced as I’ve seen on the demo. At first I thought we’ve bought our TV so soon but then I realized I don’t need to browse the internet while I’m watching my favorite show. It’s just too much to perform in front of the TV. Perhaps the younger generation are more capable of handling this kind of television technology. Updating my social media status is, however, I can do from time to time. 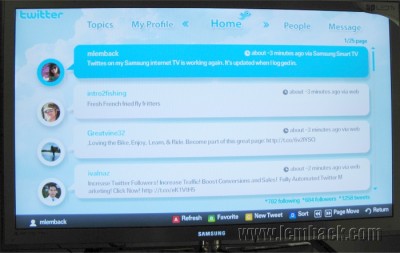 It’s only the first few months of having this TV that I was eager to explore its social media interface. And when I checked it out again, some apps have been added and the social apps like Facebook and Twitter have been updated. Cool, eh? And what’s next for TV technology?