This obelisk in Paris did not really catch my attention until I saw the movie, The Da Vinci Code. It looked startling in the movie though it was briefly shown in the background. I started wondering what’s significant about it and why it was built in some cities in the world. If I were to describe one, it would be nothing but a piece of tall column post with a pointed top. But I believe that one of the benefits of traveling is learning about the place and its surroundings in particular. This led me to dig more information of the obelisks and the result was enlightening.

Hubby's standing in front of the Luxor Obelisk

There is an underlying reason about the existence of obelisks. Although the term obelisk is of Greek, the object itself is Egyptian in nature. It symbolizes the sun god Ra and the pointed top is shaped like a pyramid believed to appear like a “petrified ray of the sundisk”. There are several ancient Egyptian and modern obelisks in different locations. It is said that the objects were built in pairs at the entrance of a temple but now we can see a single obelisk standing elsewhere. It’s astonishing to learn that some of them were shipped from their place of origin. 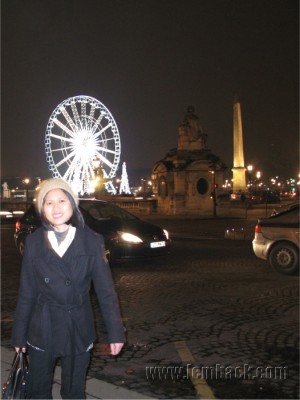 Can you see the obelisk behind me?

I had no idea that the obelisk was in this picture. Hubby and I were interested of the lustrous wheel but it turned out that he captured three in one. Four including me. Anyhow, the Luxor Obelisk in Paris can be seen at the Place de la Concorde. It is one of the two obelisks that originally stood at the entrance to Luxor Temple in Egypt. It was shipped to Paris as a gift from the viceroy. The other one remained in Egypt. It’s hard to believe how this 23-meter high, weighing 250 metric-ton obelisk was transported. You may want to research for this.

I would love to know your knowledge of an obelisk, if you have seen one and where.