It will be 20 years tomorrow since the Berlin Wall was torn down amidst the protest of the east side for freedom.  My morning newspaper is making a big deal of the history of the Berlin Wall, with ten pages of stories and illustrations from the day it was built, torn and how significant it is now for the people.  Darn, I wasn’t born yet when the east side of Berlin started to build the wall in 1961.  And by the time it was razed in 1989 I was already in college studying to be a teacher.  But my mind was not completely focused on the event when the people shouted in jubilation because it was the same year when my beloved father died.  A month and a few days after the fall of the wall, my father succumbed to death. Not because he was devastated or overjoyed about the event, I wouldn’t know he’d feel about it but he died due to prolonged illness.

I didn’t think of relating this event with my father but somehow, reminishing the fall of the wall has led to another event to be reminisced.  I was trying to remember where was I and what did I do during that time when the year 1989 suddenly poked me and I exclaimed in the back of my mind, “Oh, my God!” and started to recall the days that were.  How ironic how the fall of the Berlin Wall reminded me of my father when today is also Father’s Day here.  Jesus Christ!  How all these things just popped in my mind while writing.

Anyhow,  back to the Berlin Wall,  part of it is still standing in the city and tourists visiting there can imagine how thick and high the walls that used to divide the city of Berlin.  Now it’s there to remind the history behind it. 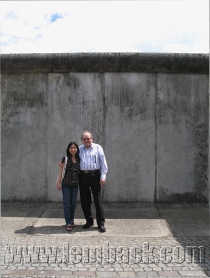 The Berlin Wall in the background 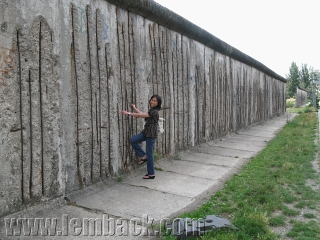 Ruins of the Berlin Wall

That’s how the ruins of the wall looks now.  My father could have seen me with these pics if he’d still be alive.  But I’m really surprised how that year gave me a back-to-back memory of the past, both of the world and of my life.  How about you?  Where were you and what did you do when the Berlin Wall was fallen down on November 9, 1989?