Can you see dusts on this Microsoft Windows 7 Ultimate box? It’s because it has been lying on the shelf for, say, about a year now. This means we’re still running Windows XP Pro in our computers. But this will be over soon. Hubby builds our PC’s which is an advantage because he can always choose the components that he thinks are better than those assembled PC’s in stores.

There’s nothing wrong with Windows XP and I’m pretty sure there are still a lot of people using it, the fact that it’s the most-liked OS among Windows users. Our PC’s still work perfectly fine after many years now. I think it’s the benefit of building your own PC with good specs that contribute to a longer life span. When problem arises you know how to find and fix it.

When Windows Vista was launched, he couldn’t contain his excitement and followed the countdown for its launch. He thought it would be something different and better than XP. He built me a new PC and installed Windows Vista in it. But the short-lived OS did not meet our expectations. Disappointments prompted him to uninstall it and replaced it with Windows XP. Where is it now? Packed in our box that contains old versions of Windows.

We got our MS Windows 7 for cheap and it will probably be taking over the popularity of Win XP. Win Vista didn’t even get to my work’s computer system but the XP will be replaced with Win 7 come August. I’m glad that our laptop runs Windows 7 so it will not be difficult for me to find my way to the new interface.

My husband, however, is dilly-dallying with the installation due to some reasons. The demands of home computing is becoming relatively great so most of the old components should be replaced with new. Not to mention the price of each that’s relatively high, too, though it changes from time to time.

These are the components already purchased:

Coming soon to join the above components: 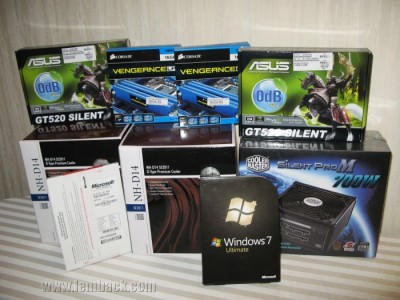 Since we’re both not interested in computer gaming, he aims to build our PC with a silent computing environment and capable for video or image editing and storage.