This must sound odd but we do celebrate Waffle Day here in Sweden.  It’s a celebration that I get accustomed to since hubby and I bought a waffle-maker, lol!  Home-made waffles are better than those at the cafés or restaurants.  The celebration has something to do with the Annunciation (when Angel Gabriel announced to Mary that she would bear the Son of God).  But it was not a Waffle Day in the beginning.  It was called Vårfrudagen (Our Lady’s Day) which later sounded like Våffeldagen (Waffle Day), thus eating waffles on this day begun. 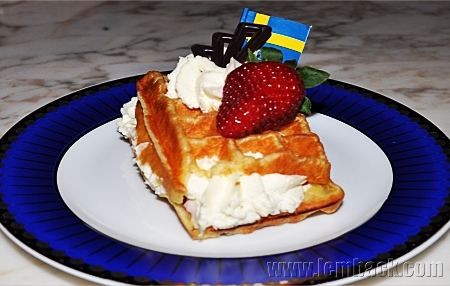 I did not make the waffles above although I was home that day.  I don’t think I could manage since I was walking with crutches then.  But I thanked hubby’s friends who were so thoughtful and kind to buy us this special waffles.  Decorated with a flag, a chocolate and a strawberry, it made me feel so…..Swedish. Hahaa!

Even if it’s a special day for waffles and almost the whole population eat waffles on this day, it is however available all year round at any cafés and restaurants.  I remember the first time I ate it at a café in town with hubby.  I thought it looked strange as it was not the same waffle I used to have in the Philippines, the one which had either a cheese or a hotdog filling.