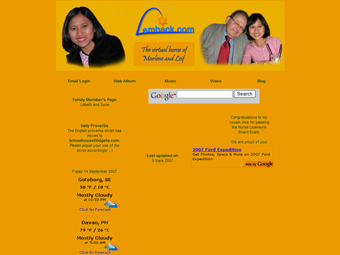 This is the screenshot of my second styled page. Though not really satisfied with the outcome of this layout, I managed to create the link buttons and the header through CSS properties. I started styling the tables and creating layers, but the hardest part was the positioning itself. I had to rely on the tables or cells in order to get the right position or place for the layers, in other words, the layers were inside the tables or cells, haha! I haven’t tried making a layout without tables yet, but as far as I read about styling a page without tables, it’s pretty tricky considering how to position the divs and layers. And I guess this will be a long, long way for me to learn. For now, I am satisfied with the little things I learned about CSS. 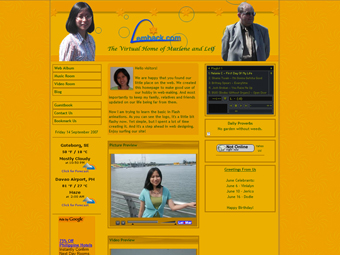 This last layout I did with HTML and CSS. I uploaded it sometime in April and had it online until late September. In this layout, I tried to create hover effects to link buttons in CSS. All the background images and borders were also styled through CSS. Also in this layout, I started to learn simple flash objects. The header which I created in flash was not really satisfying for me, but it was the best that I could create. My next step in lay-outing is to learn WordPress, the most popular blog engine as far as I knew.