There’s one thing I like the most when I am out working – the pleasure of going to malls between free periods or before going home and window shopping.  One of my favorite is the mobile stores where displays of different phones are absolutely enticing.  The other day, I thought of checking out the new iPhone 3G as I’ve not seen nor touched it yet.  But seemed they don’t put it on display and I didn’t have intention to buy so I did not bother to ask for a preview of the phone.  I looked on the display of phones, touching every piece that attracts me, reading its specs or something.  Until my attention stopped completely to the sight of a phone which name is unfamiliar to me.  I know 4 or 5 names of phones, mostly those familiar and widely used ones.  So I held the somewhat slim and sexy phone named HTC Touch Diamond.  It’s a touch phone that everybody would want to touch.  And the specs are tempting, too. 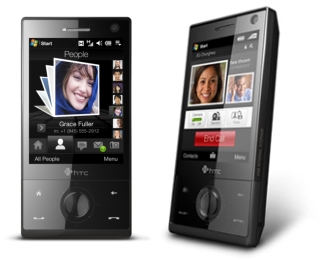