Despite the rapid growth of mobile phones and mobile phone users there still exist pay-phone booths everywhere. They are, for obvious reasons, built where it’s easy to access and visible to the public. Most of them bear the same look of a phone as before but what has changed apparently is that one can pay with a credit card now instead of coins. 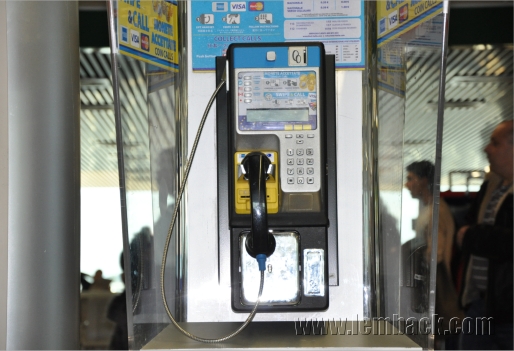 I can’t remember the last time I used a pay phone but if I use one now it should be that I am compelled to, not that I want to. Perhaps when my mobile phone’s battery goes dead. I still see a number of pay-phone booths in the city but I have not seen anyone standing at it and making calls.

Speaking of a pay phone, I spotted this phone booth at the Leonardo Da Vinci airport in Rome. Hubby and I sat there while waiting for our next flight. It was there but, again, I had not seen a person standing by and making a call. I was wondering how often it’s used. People are travelling with their mobile phones, smart phones and calling back home could be easier and faster than going through a phone booth. Some connect their laptops at the airport wifi and make a call via voip. I don’t know. This is just a thought.