I’ve never been in an ice stadium but last Sunday, a student whom I do study help gave me the chance of a lifetime to be in her closing presentation. She is learning ice-skating for about two years now so she still belongs to the novice or beginner group. The stadium is not that big compared to the one in the city centre where the World Championship in Figure Skating was held. Funny cos I didn’t thought it was cold inside the stadium to think that it’s an ice stadium. My hands and feet were frozen still after sitting there for almost two hours. We were all wearing winter jackets and gloves but we need to remove the gloves from time to time to give applause. It’s amazing how the skaters could stand with the cold when they had but costumes and those Santa dresses on ice. I did take some pictures of them, but it was kind of hard to get the right timing cos they were moving all the time. 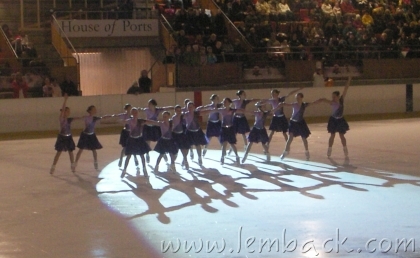 These figure skaters have come a long way in the training that they don’t need a helmet anymore. They looked stunning in that beautiful costume though the presentation wasn’t close to perfection yet.

These little ones I enjoyed watching a lot. See how cute they were in the Santa dress and the Santa cap was actually with a helmet beneath. They were in different ages and the youngest ones I could say were like 3-4 years old.