I had seen castles on television when I was little but mostly in animated films. They were always huge with many rooms and occupied by a king and a queen, prince and princess with their countless servants. Although I didn’t dream to see a real castle, I wondered once how big it was and how it looked inside. But little did I know that castles in the past centuries were built as offensive and defensive structures to launch raids as well as protection from enemies. Living in a castle before was not a luxury but a fight to win something. There are quite a number of castles here in Sweden. Some of them still served as private residences, some have been turned into hotels. There are a few that’s been turned into schools and some are now museums. There are ruins of some castles that can still be seen, too. The castle that we visited last summer was one of those that’s been made as museums. This castle was built in the 12th century, yet still standing strong and stable. Significant histories were scribed on the paintings of the walls inside the castle and the things were preserved to look exactly as before. It looked like the entire castle was made of stone, except the floors. Above is the one of the rooms in the castle. It’s not allowed to take pictures in some rooms though. It must be a dining room but I was fascinated by the sculpture on the wall. 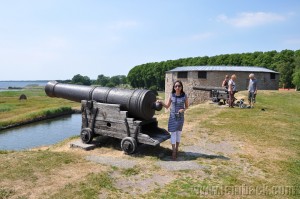 The cannons outside the castle

This is it! The weapon of the past, these cannons are lined outside the castle. I was wondering how they used them cos when I touched them, they seemed to be made of stones but hubby said they’re made of iron.

the centre ground of the castle

There were activities for the children and they would have the opportunity to wear medieval costumes and play like warriors of the past. going around the castle

It wasn’t in our plan to visit Kalmar Castle but because we drove to Kalmar on our way home from Karlskrona so we took our chance to get inside. And the sight was worth more than what we paid for. Thanks to hubby for taking these awesome pics.