OMG!  I’ve got a niece who will start a course in college come June, too.  How time flies!  Some of my nieces are nearing puberty already.  The last time I saw them was two years ago but they’ve apparently changed from that time.  I could see from their pics on Friendster that they’re blossoming like pretty flowers among the bushes ready to be picked anytime, hehee. 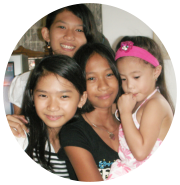 The big change that they probably noticed is the tiny swell on the once flawless face.  They most likely thought it’s awful to have those unwanted sprouts on the face so they asked the expert.  They asked me!  And their loving Tita (Aunty) who is thousands of miles away from them is more willing to help.  I don’t know how clean my face seems to them but I used to have a good-looking (face) skin when I was their age.  I was more conscious on preventing pimples or acnes to appear on my face, rather than treating them.

Whey they asked me what to do about pimples and black heads, I told them to just wash their face regularly with luke warm water, as I used to.  I remember I used Perla white, a special detergent soap for soaking white garments, hahaa!  I don’t how they felt about it when I told them to use the soap.  That is if this soap could still be found in the stores cos that was a long time ago.  Although I had a clear and smooth face, I wasn’t completely excused from not having a single tiny spot swelling on my face.  I had to use a special cream called Nixoderm to get rid of it.  Again, I don’t know if this cream is still in the pharmacy now.  I remember there was a cream called Chin Chun Su I used when I was studying in college.  But I stopped using it cos it smelled so much that anyone could guess I was using it.

Anyway, my advice is basically based on my experiences and it has nothing to do with what types of skin they have whatsoever.  I think it’s important to know one’s skin type before using any facial creams or remedies agains pimples or the likes.  I have used different facial creams myself as my skin type has changed from warm climate to seasonal weather condition.  As we usually tell as a joke with a serious tone, “it’s hard to face a problem when the problem is your face.”