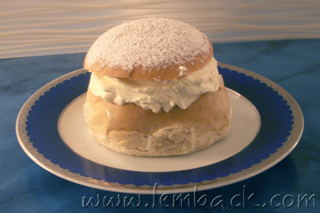 Yesterday was such a special day for most people in Sweden.  It was a Fat Tuesday or in Swedish, Fettisdagen.  Since today is Ash Wednesday for most Christians that marks the beginning of Lent, it is traditionally celebrated here in Sweden the last Tuesday before Lent.  It is known that on Fettisdagen, foods containing fat should be consumed before the 40-day period of fasting and penitence known as Lent season.  The presence of this Swedish Bun or Semla completes the Fat Tuesday.  Although it is available in shops and bakeries throughout the year, it is on Fettisdagen or Fat Tuesday that this traditional bun is mostly consumed.

As you can see, the bread’s top is cut off and the whipped cream in between.  But there are actually more fillings inside and these make this Semla or bun interesting.  It is filled with scooped-out breadcrumbs, milk and almond paste, then topped with whipped cream.  The top of the bread is placed again as a lid, then dusted with icing sugar.

To date, this is only my second time to eat Semla.  It’s so sweet for me, I usually scoop off the almond paste 😆