Do you wish you were a princess for a couple of days? Get onboard Star Princess the cruise ship! I don’t want to be a princess but I do wish to be cruising someday with this huge ship and feel like a princess somehow. That’s me dreaming on and I think someone has just slapped me on my face and wakes me up. But that dream always comes clear everytime I see these pics I took when hubby and me were on a cruising ship from Karlskrona (Sweden) to Gdynia (Poland). That was an overnight cruise with a smaller vessel. When it docked at the port of Gdynia we saw the Star Princess cruise ship on the other side and I couldn’t help but admire its greatness. 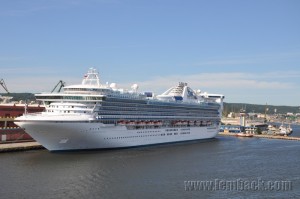 The Star Princess at the port of Gdynia

The ship we were cruising with was obviously smaller than this. It was our first sea-cruise and though it was short the experience was splendid. I started to wonder how it would be cruising with Star Princess for several days. 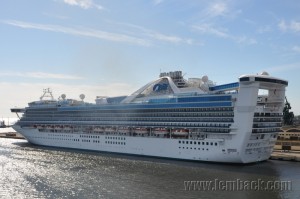 The Star Princess in Gdynia, Poland

The price really shocked me so I think I’ll keep dreaming on until my ship comes in. Incidentally, I learned something about this ship and other Princess cruise-ships. If you’re familiar with the tv-sitcom of the late 70’s called “The Love Boat”, it’s one of the Princess ship fleet called the Pacific Princess. I happened to watch the sitcom when my aunts were watching it when I was little.