Today is my last working day which is specifically intended for assembly of all mother tongue teachers in this city.  As usual, the program started with a thanksgiving talk of one of the bosses while the rest of us were just sitting and listening. Others might just pretend to be listening attentively, who knows.  I’d do this when the talk becomes boring.  In situations like this, I always choose to sit in the front rows so that I wouldn’t be distracted by murmuring conversations of the other bored listeners. Sitting in front would keep me from feeling bored and drowsy and it helps when the speaker looks around and meet my eyes.

But this time, I sat on the back seat because I didn’t know the bus time table was changed to summer time table which means less bus tours compared to ordinary school and work seasons.  I wasn’t alone, anyway, to arrive late but quite a number surprisingly.  There’s only one reason why I don’t prefer to sit in the back and that is the noise reverberating from small conversations around.  It’s darn annoying they couldn’t go sleep instead.  And it’s more distracting when they speak in their own language.  Think about 185 people talking in 50 different languages.  That’s how large our group is.  Sometimes the hush from the front row could help for a while and then the murmuring would start again.  I’ve heard enough indistinct voices today that soon I get Tinnitus.

So what I did was I listened instead to the “almost whispering” conversations around me and see if I could get a hint of what they were talking about.  And these were how I heard some words:

Geezz!  I didn’t even know how the words started and how and where it ended.  The worst was during the coffee break when everybody would have the chance to talk and I, being the lone teacher in Filipino, was like standing at the Tower of Babel, waiting for God to give me at least one companion in this confusing situation.  But I was glad one Spanish teacher was so kind to have accompanied me all the time.  And the common language we spoke was Swedish.  And we understood each other, hahaa!

I don’t have a hard time blending in myself in the group.  Everybody is friendly but once they found their landsmen, their language automatically takes over the conversation.  But as long as the language in this country dominates, everybody learns how and when to use it.  Then everybody understands each other. 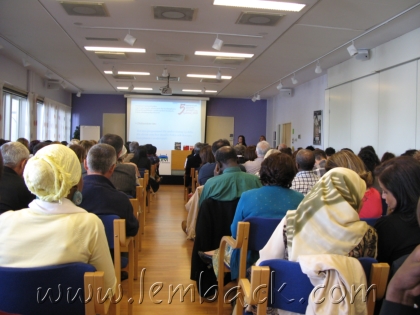