We’re glad to be back in Munich again after nearly thirteen years. We had a brief stay in this city when we did our first Europe road trip. And now it’s like our first time here because we didn’t get to see so much then. We arrived yesterday by plane from Gothenburg. The taxi ride from Munich airport to Sofitel (hotel) was quite long partly due to traffic congestion. Sofitel is located in the city center and it’s close to the train station, trams and malls. The weather has been mild and every now and then the sun timidly peeks at its best.

We learned that the malls are normally closed on Sundays so we put off shopping today. Instead, hubby purchased a 3-day ticket package for us to go around by tram. He knew where we should go first so we took the tram and got off to see the Schloss Nymphenburg (Nymphenburg Palace) and Nymphenburg Park. From the tram stop going to the palace was already a long walk. And from the Palace through the park the walking seems endless. Hubby got so tired from walking so we took a taxi to the city. 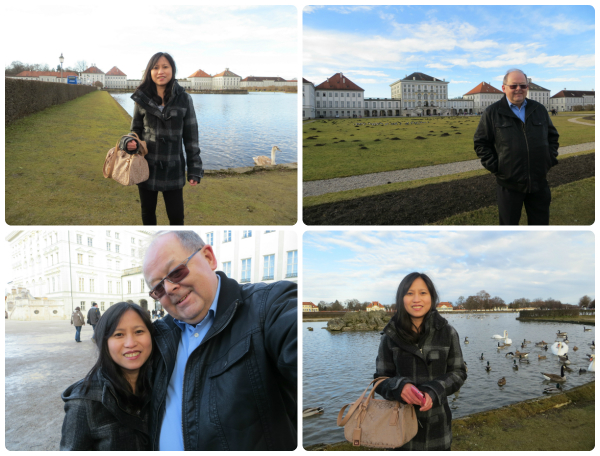 Then we started walking again to find a place to sit and eat. Though the malls are closed there are still streets that are crowded. But it’s kind of strange to see the shopping stores closed on a regular Sunday. I usually see them closed on special holidays. Munich is the second city we learned that shopping malls are closed on Sundays, being Barcelona as the first. Anyway, after going up and down the escalators from the road to the so-called underground stores and passages we settled ourselves to an Italian restaurant.