If you heard that Europe is suffering from intense cold this winter, it’s definitely true.  The snow on the ground hasn’t melted yet since last month and it seems to be snowing some nights that when I go out in the morning snow is covering the ground anew.  It could have been better if it rained sometimes to keep the snow from becoming ice, because it’s really hard to walk on icy ground.  I remember hubby’s brother broke his ankle when he tripped over a slippery surface about five years ago.  And I don’t want this to happen to me so I am being careful when I’m out, especially that the snow that’s been on the ground for days can be treacherous.

It’s not only the ground can be icy with this extreme cold but the waters in the lakes and canals.  The intensity of cold can in fact seen on waters.  Just like what I saw a week ago in Gothenburg’s harbour canal, its surface was covered with ice.  Then someone might have wanted to know if the ice was compact and threw a shopping cart in the canal.  I had no idea how someone did it cos the shopping cart stood as if it was placed purposely that way. 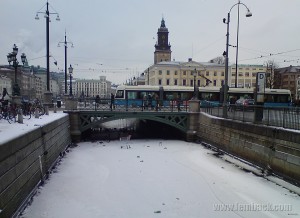 A shopping cart on icy canal?

The canal was quite full of rubbish that day and it was not a pretty sight.  Anyhow, the one who threw that shopping cart wasn’t a fool to take a walk or jump on, or he or she must have been frozen to death, lol!  The ice was not stable and it would break with heavier weight.