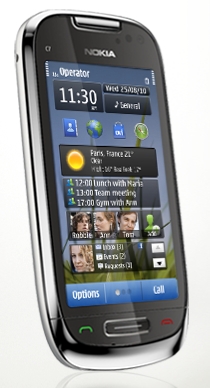 I thought it was Nokia’s latest mobile phone but it’s not. Mobile phones are conquering the billboards and ad spaces everywhere and everytime there’s a launch for a new one. My eyes can’t elude those large images of a mobile phone and read all the features in haste. Just recently, I saw an advertisement for Nokia C7 that had been set up on bus stop walls. I could tell from what I saw that smart phones are taking over the classic phones we used to have. Your kids might be using small touch phones sooner or later and reach social media in a click of a button. If that will be the case it will not be difficult to find one since the growing demands of smart phones and social media integration would prompt the mobile manufacturers to continually create new ones.

Nokia C7-00 is a good choice if you prefer a smaller design but smart enough to connect you to different social media contacts. I do prefer smaller phones cos they’re handy to have in the pocket though I need a more advanced organizer so this would not be my choice. But the features of Nokia C7-00 are worth more than its cheap price. It’s not only the specs that make this phone interesting but the beautiful design as well. It’s kind of boring when all smartphones look the same. Why not have a stylish design like this Nokia C7-00.