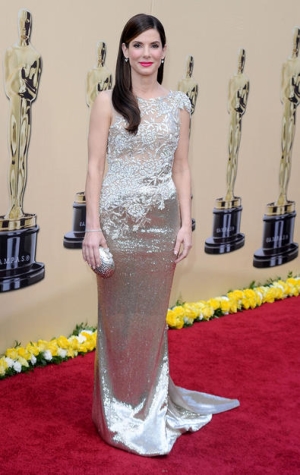 I was ecstatic when I read that Sandra Bullock won the Best Actress in a Leading Role for the 82nd Academy Awards.  Her brilliant performance in the movie, “The Blind Side” has given her the best of years in her career.  The day before the Oscar’s night she claimed her trophé at the Razzie Awards as the Worst Best Actress for the movie, “All About Steve”.  It was hilarious when she came up with a cart of DVD copies of the film for those (in the audience) who haven’t watched it.  As for the Best and Worst awards she simply implied, “You can’t enjoy one without the other”.

I knew it was Oscar’s night last Sunday but I didn’t watch it because the airtime was at 12 midnight.  Furthermore, I don’t follow this annual show diligently (every year) and I can’t remember anymore the last time I watched it.  But I was eager to know the winners this time because one of my favorite Hollywood stars, Sandra Bullock was nominated.  And I couldn’t be more delighted when she finally won her first Oscar statuette.  I should have watched the show.  She dazzled the night not only with her statuette but her gown and simple look were admiring, too.