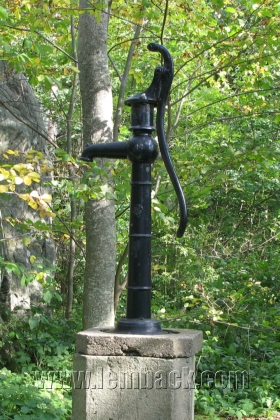 I saw this water pump when my colleagues and me were having a trip to an historic island outside Gothenburg. It was there I saw this good old water pump which I thought did not exist in other countries but mine. Somehow, it bended my thoughts back towards the past. In a village where I lived, there were water pumps in almost all residents’ lot. The water pumps were smaller than this one though. Some were built higher as this one, some were low. I remember ours were built low so my Mama and Papa had to bend while pumping. The water from the pump was used for laundry, dish washing and bath. But it wasn’t suitable for drinking for obvious reasons. We used to buy drinking water from a store that was subscribed to the National Water and Sewerage System. That time, not all households could subscribe to the system because of limited area coverage.

But times are changing and the water system has reached the households,even in far-flung areas. Not one of my nephews and nieces has seen a water pump and they will never see any while they grow up. I don’t know what happened to that water pump when we moved out from the village. But if I’d lived there till the present times, I’d certainly let it stay and stain where it was standing and would tell memories of it to my grand nieces and nephews.