We decided to take a one-way flight to Stockholm to make the best out of the trip since we were just be there for two days. The plan was to take a train but hubby anticipated a situation that might delay our arrival. News of the train being stopped due to some electrical problems or something is always on the rise these days. He booked an early-morning flight and after 50 minutes on air we arrived in Stockholm before 8:00 a.m. He also booked our hotel room beforehand so we went straight to its location. We had breakfast at the lounge and after that we started walking from the hotel towards the downtown area. 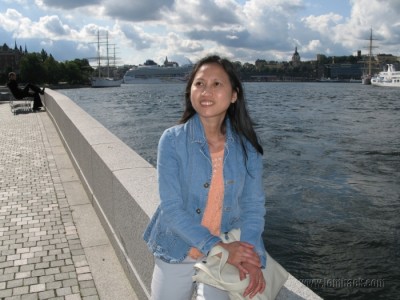 It was years ago the last time we were in Stockholm and we didn’t even see many places because of the weather and all I saw was water everywhere. This time after walking around the city I could see that it’s the water that’s making it beautiful and impressive with the city’s bridges and wharfs and harbours. It seems to me now that Stockholm was built on waters. We headed to Gröna Lund by a taxi and walked to Skansen but it the rain poured just when we were at the gate. It something not everybody wants in summer. We decided to take a taxi to the hotel and borrowed an umbrella then we headed to an Italian restaurant and had early dinner instead. We sat there until the rain stopped and walked to Gamla Stan. Hubby fancied this narrow street. 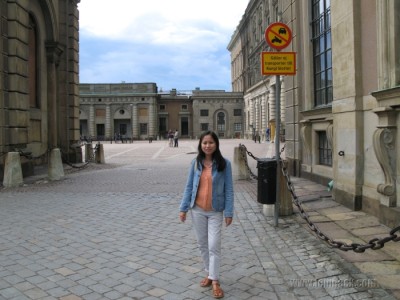 Finally came to the Kungliga Slottet (Royal Castle), the heart of Sweden. I thought of it as a highly secured and gated area with armed guards around but it’s a bit open though the castle itself is out of bounds. Behind hubby is one of the cannons

The uniformed guards behind would do a salute and a march every now and then or it must be at a specified time. I could see they were heavily armed. still part of the Kungliga Slottet

We were going out on the other side of the Kungliga Slottet and going down a stair to go to Drottning Gatan. Nice architectures behind me, yes? We were tired from walking so we took some rest in this little park before we walked back to the hotel. Behind hubby is Rosenbad where the State Minister performs his tasks. The view from the hotel was relaxing after a day’s walk. But forgive my picture, I’m not good at taking pictures at night. The next day we did our errand and the purpose of being there. Then we drove back home that took about 4 hours. I will be posting more pictures with description of each place we visited, as I always do. There are many things about Stockholm that’s worth sharing to you.