It’s always good to have your camera with you everywhere you go. For a professional photographer, this means carrying heavy camera paraphernalia but for amateurs, a light-weight digicam or mobile phone camera is enough to carry around. In my case, I’ve been using my mobile phone’s 12-megapixel camera to shoot whatever I want –  anytime, anywhere. Here are some photos I took a week ago when I was just sitting in the car while hubby was driving. 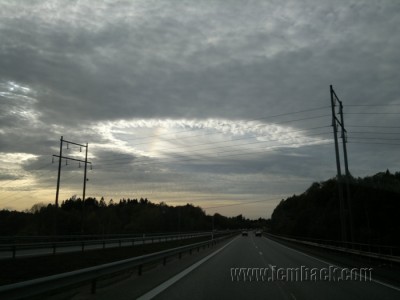 I managed a snapshot of the holed sky while the car was running but it seemed I took it while standing still. Hubby normally drives faster, too, on a motorway, say 110 km/h or more.  And is that a rainbow over the hole? That’s the one that prompted me to shot it. It wasn’t actually dark yet at past 3 p.m. but it showed that way since I was facing the daylight. What do you think of this mobile snapshot? 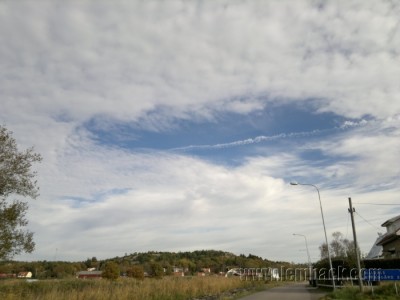 This one’s I took earlier but on the same day, say, half past 1 p.m. in another place. Hubby parked the car for a couple of minutes to mind his phone and I took the chance to grab mine to shoot the blue and white sky. So invigorating to see this color of the sky in a cold, autumn afternoon.