This is my first time to blog about my holiday trip and actually don’t know where or how I start. It will become a personal diary if I am going to write about the day to day events. Hubby and me are now on our third trip within Europe by car and thought of staying in Berlin as the first destination and thereafter Prague and Poland. I should have posted something last night when I we arrived in Lubeck in Germany but my mouse didn’t work it must have been damaged in the case. Though the internet in the hotel was apparently cheap (€0.15/min.), I skipped to blog cos I am not at all comfortable with this touch pad thing, in other words, I don’t like it.

Anyway, hubby and me left home on a Sunday afternoon at around 3:00pm driving southwards. We took the car aboard the ferry (Scandlines) in Helsingborg to Elsinore in Denmark instead of driving all the way to Malmo, the city in the south of Sweden for it would take more time driving on the bridge to Copenhagen. Two hours drive from Elsinor took us to another harbour, Rodbyhavn to aboard a ferry again (Scandlines, too) to finally get to Puttgarden in Germany. It was about a quarter past eight so we decided to stay in Lubeck, Germany and found a hotel to stay at around 10.30 pm. It was about two hours drive from Puttgarden.

Before I continue this post, here are some of the pics we took on the way and after driving around Lubeck this morning before we headed to where we are now – Berlin. 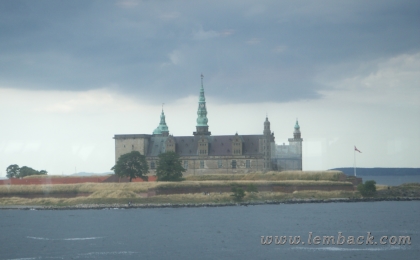 The Castle of Hamlet

The Kronborg Castle in Denmark, known as the setting for Shakepeare’s Hamlet. It was also there where Hamlet was performed live for the first time to mark the 200th death anniversary of Shakepeare. Unfortunately, I couldn’t take a closer look at the castle because I was on a ferry when I took this picture. 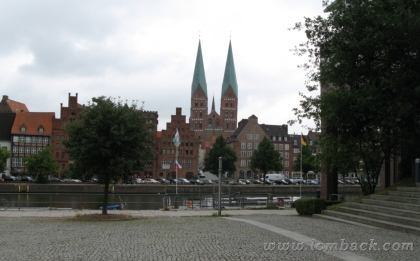 The St. Marien Church in Lubeck, Germany in the background. After taking this picture, we went back to the car as it started to drizzle. Not a good day to walk around the city though.

After Lubeck, we drove to Hamburg, another city in Germany. This is how the central station looks. We stayed for a while in and outside the station, bought some souvenirs before heading to Berlin.

This is our third tour around Europe by car and it’s exciting as usual.