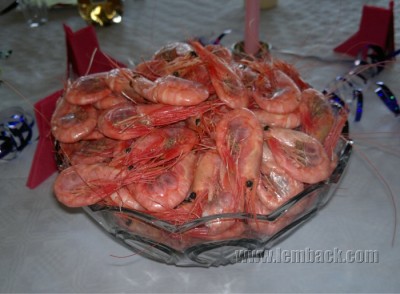 I’m not familiar with this Swedish tradition but I have observed that during August most people organize a party called kräftskiva or crayfish party. It’s oftentimes combined with shrimp or just crayfish party. I prefer shrimp cos it’s easier to peel than shelling a crayfish. In the old times, the party had something to do with the harvest season for crayfish which would occur in the late summer but today it is even celebrated in the early August. You can imagine all the people in the party are eating crayfish and shrimp with their fingers since that’s how it should be. It is also served with bread, cheese and smorgasbord dishes (smörgåsbordrätter). Appropriate drinks are aquavit, snaps and beer.

Once we were at a baptismal celebration, this bowl of shrimp was the main dish. It wasn’t time for crayfish harvest, though one can buy it frozen all-year-round, people prefer to wait for the harvest season which falls in August. Anyhow, the shrimp made our dinner exquisite even without crayfish. It was like a buffé of make-your-own shrimp sandwich and on the table were salmon, sausages, ham, different kind of dressing, bread, and salad. I’m beginning to like the simple food preparation here. The people in my hometown, Davao, would probably think I’m stingy if I serve just shrimp on my birthday, lol! Or maybe I should host a shrimp party when we’re there.