All I want for my birthday is an espresso maker! I’m making it easy for hubby to find me a gift this time. I know that if he decides something for me it’s going to be more of a personal gadget. But I told him a few days back that I wanted an espresso maker. He found out that there were many different kinds of it when he searched, and not only that Nespresso thing that George Clooney was showing in a commercial. I didn’t know which one he chose and I thought we would buy it together so that we both could decide. Last night he gave me something that was wrapped in a newspaper and he said it was something sexy, hahaa! What sexy! I don’t want something sexy. I’m already sexy, lol!…I told him. I was beginning to get upset when I saw this wrapped thing. I said to myself it’s too small to be an espresso maker. I couldn’t wait till today so I unwrapped it and…. 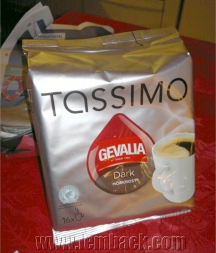 Voila! The T-Discs for my espresso maker. His humour can sometimes drive me nuts! He said he’d buy the machine next time cos he couldn’t afford this time. Then he went to our storeroom and gave me a paper bag full of T-Discs in different flavour. How should we drink all these without the machine? But then I realized he’d already bought one when he went again to the storeroom and handed me a big plastic bag. It saved me from going out today, anyway. This is what he found – the Bosch Coffee Maker and a red one, too. This wasn’t among those he showed me though I like this one better. It’s not just a coffee maker but I can make a hot choco drink, tea, cappuccino and espresso in it. Hubby bought an espresso maker a long time ago but I think we’ve only used it twice or so cos it requires manual skimming of milk and it spreads all over so it’s left in the corner unused. We were both excited to try the new coffee maker so we made the original dark coffee first among the T-Discs. But it was too strong for me so I switched to Latte Macchiato and it was just the way I wanted it!