It’s definitely not a good week to celebrate Mother Language Week.  And definitely not a pleasing idea to bring the students to a museum to see an exhibit when it’s snowing non-stop.  But the plan was agreed beforehand so we proceeded.  Children don’t complain about the weather, anyway.  It’s adults like me who are capable of making a big deal of weather condition.  I took my first group of students to the Museum of World Culture to see an exhibit of students’ works from respective mother tongue classes.  It went quite well since they were only four but taking them on a tram was a big responsibility on my part.  Since they were small, I had to ride with them to and from the museum.  I was so tired already when we rode back to school but my students were still in full spirits, talking and laughing on the tram.  They seemed to be enjoying the whole plan to get away from the classroom.  I wish I had the energy as a child’s again.

Today’s group could have been better because my students’ parents came along.  But the weather was worse than yesterday’s.  I was waiting for them at the kiosk but I decided later to wait for them at the Museum’s entrance instead because heavy snow was falling again.  Thanks to sms facility that made my job easier to contact them.  The day ended well as expected and unlike yesterday, we had almost visited every room where exhibits were, not just in the Mother Language’s exhibit room.

I don’t have pictures of my students at the museum and even I have I am not allowed to post pictures online without the parents’ approval.  This rule concerns all school teachers here so I may leave this post without an image.  However, though irrelevant, I did manage to take some pictures while I was standing at the kiosk pretending to enjoy what was going on around. 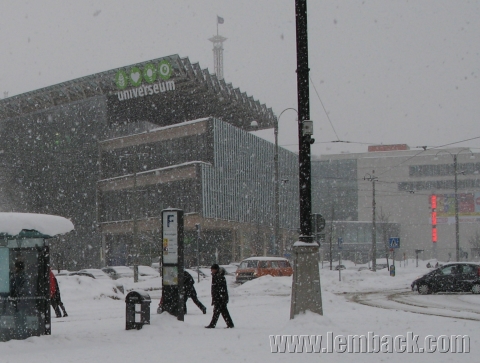 a glimpse of the Museum of World Culture, far right

February 26 is Mother Language Day in Sweden
Cheers to about 50 different languages, including Filipino!