This sight greeted us one early morning in Berlin while we were on the way down through to our breakfast.  It’s not the view we normally get to see when we are riding an elevator, and that day was by chance a view of two men cleaning the Aquadom in Berlin.  While the hotel workers under the tube were busy tending their guests, the two divers in the tube were having a good swim while feeding some 2600 fish in different species.

According to Wikipedia, this Aquadom in Berlin is the largest acrylic cylinder in the world.  I didn’t know about this but what I knew was that it was the largest aquarium I have ever seen.  Hubby and I didn’t know and haven’t heard about the said Aquadom before.  It was a mere coincidence of discovering this fascinating attraction in Berlin when we stayed at the Radisson Blu (formerly Radisson SAS) Hotel where the AquaDom is located. It is the center of attraction in the hotel’s lobby but the entrance to the Dom is next to the hotel through Sea Life Berlin which maintained it .  The Dom offers a two storied-elevator ride where one can experience deep-sea diving without actually being in the water.  The ride is both fun and educational as one gets a closer look of the sea life (especially the tropical fish) at the same time learning about them. 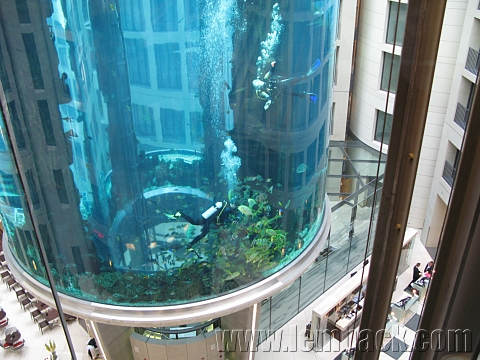 Two divers in the AquaDom cleaning and feeding the fish

Accordingly, these professional divers are working full time and they are cleaning the Dom everyday.  Unfortunately, we’d seen them just once, maybe because we slept in most.