While strolling on the Promenade des Anglais in Nice we came across a site that made us stop and wonder what it was. The inscription on the stone was in French but some words were comprehensible enough to grasp that it’s for the victims of an accident or something. But the date took so much of our attention – the September 11, though it happened in 1968. 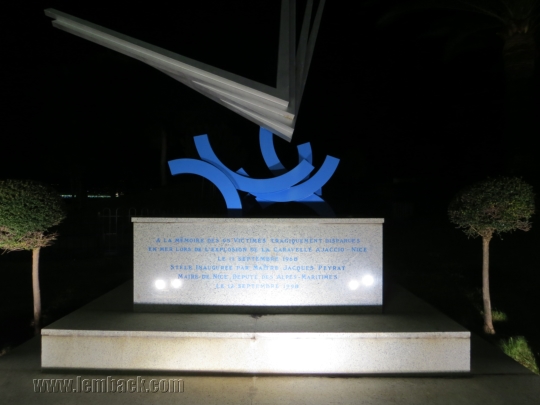 It was kind of dark when we saw the memorial but the lights revealed its significance in the place. Later, we learned that it’s a memorial for the victims of the ill-fated Air France Flight 1611 that caused death of 95 on board. The place crashed into the Mediterranean Sea off Nice. It was believed that the crash was caused by a missile (weapon) test misfired by the French army. (Source: Wikipedia) September 11, 1968 was indeed a catastrophic date in France. When 9/11 comes in mind it brings me back to the WTC attack in America. But it seems as though it’s not the only country that has a history of 9/11. I remember the Swedish minister for foreign affairs died of a knife attack on September 11, 2003. This makes it three stories I know about 9/11. The names of the victims were inscribed on each of the stones by the sides of the stele. This memorial is close to Aeroport Nice Côte d’ Azur.