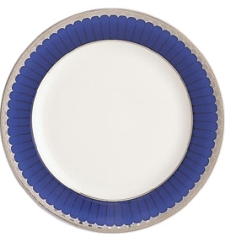 I have finally found the set of tableware that I meant to purchase way long ago. It was like a subscription of exclusively designed tableware where I would pay for the item when it’d be delivered. I made just two orders that time and didn’t push through with it and instead spent on rather necessary things. I wanted this tableware because of its attractive color and peculiar design. I’ve looked around to find something similar to this that’s not too pricey but nothing impressed me as this one. The Marianne Royal Blue tableware was designed by Sigvard Bernadotte, the Design Prince of Sweden who was born into the Swedish Royal family but made a name for himself as a graphic artist and industrial designer. I didn’t know then that the tableware was named Marianne Royal Blue and all I knew was the name of the designer that was printed at the back of each item. I have one plate and one appetizer plate so I need more to complete the set.

I actually forgot about this tableware since it was barely ten years ago when I made the purchase but it was hubby who kept asking me about it these past few days. I said it was from a catalogue but I couldn’t remember anymore the name of the company that was selling this item. I guess he developed a liking for this tableware when he saw the two pieces we had on the table, though I only take them out on rare occasions. He remembered them when we were looking for new plates recently. And I’m delighted that I found the site after searching for Sigvard Bernadotte tableware.