Hubby told me months ago he wanted to read the book, “Låt den rätte komma in” before he would watch the film.  The book and the film were in Swedish but I told him it seemed not familiar to me.  Even the movie which was shown in October last year didn’t ring a bell or so.  How would I know, otherwise, when as far I can remember, I’d gone to a movie house just once last year when me and my friend watched Mama Mia, the movie.

When he told me further that the film (Låt den rätte komma in) has claimed international recognitions and it’s still been showing in theatres abroad  I got interested to buy the book which I did.  Foremostly for hubby’s sake who wanted to read it.  He reads faster than I do so I waited till he’s done.  He asked me if I wanted him to tell the story but I refused.  I’ve been reading it for nights now.  I can read faster during summer when I stay at home a lot.  The book is in Swedish but it has translated to several languages already.  Hubby and I usually prefer to read books in English if it’s written by an English or American author, and Swedish if the author is a Swede.  Don’t ask about Filipino books and authors cos I can’t find any here. 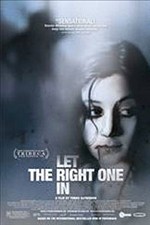 The story is about a boy who is the target of bully at his school and later becomes a friend of a girl vampire.  This is the first time I read a horror novel and I can tell that I’m not the least scared while reading the book.  With all the blood sucking and neck biting and blood squirting everywhere,  I didn’t have sleepless nights so far.  Unlike when I watch a horror film I could skip a horrifying scene by closing my eyes, hiding my face behind hubby’s shoulder, sometimes making a fetus-like position in the soffa.  I couldn’t do all these while reading or I couldn’t read the details at all.  I guess this is where the difference lies, between a horror novel and a horror film and I tend to be scared of horror films.  Nonetheless, the book is far way better with some implicit details than in films so I don’t regret reading this book even if it fails to scare me.

I have seen the international trailer somewhere in the net and it seemed spooky to me.  I wikiquote, “The American version is called Let Me In because the publishers requested that Lindqvist change the title as they believed it was too long” (to be released in 2010).  But the title “Let The Right One In” in English subtitle is still showing in theatres.  As for me and hubby, we’ll get the DVD film of this which I learned was out in stores starting this month.  It would be a night of spooky film in springtime.