It was from the ad brochure inserted in the newspaper when hubby showed me this Nokia N8 yesterday. We are both mobile-phone freaks, changing phones once in a span of two years or less. But honestly speaking, we don’t own any smartphones yet so we’re a bit off the trend to be called mobile freaks. I did want to get an apple and when hubby saw me browsing my mobile operator’s website to check the phone, he tried to suggest one from the galaxy. The apple was no longer the apple of my eyes when I saw the vibrant light of the galaxy. I went to the mobile shops to see it physically and after knowing the specs and all, I said yes to his proposal. Then he said that I should wait a while cos the galaxy’s OS would be updated with the so-called Android 2.2. Imagine how he ruined my excitement to reach the milky way! 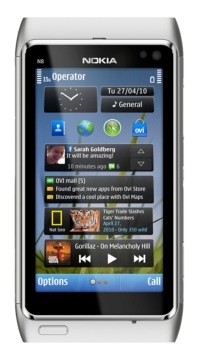 Now comes Nokia N8, a smartphone which according to him, has a good camera and video feature. I’m beginning to wonder what a mobile phone really is for nowadays. I admit I take a lot of photos and listen to music and podcasts, twittering and facebooking with my mobile phone, but videos and HDMI port? Whooo! It’s way over my head how these mobile manufacturers could integrate high definition video function on phones. On the other hand, it’s good to have all your tech-lifestyle needs in one hand rather than grope and hold many devices at the same time.

Though the first mobile phone that hubby bought for me when I first came here was a Nokia, I haven’t used any models of this manufacturer in a long time. I’ve been hooked on SE phones since then. If this Nokia N8 will be my second Nokia phone and my first smartphone, it’s too early to tell. But quite frankly, I like some of the specs of it, aside from its distinctive design. The amoled screen is not as super crisp as that of a galaxy but I think it’s good enough. What’s important is the ease of making a call in one click of a button in the home screen; not to complicate by going to the program list and select blah, blah everytime you make a call.

As of this writing, Nokia N8 is not yet on sale here but it will be available anytime next week. Pre-ordering can be made, however at my mobile operator’s website and through Nokia’s online shop. The cost ranges from 4,600 sek-5,000 sek ($600-$700). And as of this moment, I’m torn between nook and galaxy.