Beware! Nothing and no one escapes from the eyes of Skansen Lejonet. This fort is watching the city day and night, witnessing decent or disturbing moves of anyone in the vicinity. If only it can speak and reveal what it has been seeing. But it can’t, for it stands there alone and its reason for being there is no longer as important as in 1694. Now it’s one of the city’s preserved forts. Meet Skansen Lejonet in Goteborg.

Awooo! I didn’t realize at first that the holes of the fort indicate parts of a face. It looks like a head coming out of the house to see outside. Skansen Lejonet used to be a military facility but later became a military museum, then deserted in 1942. 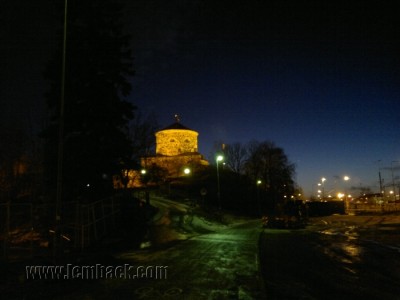 Now it serves as a place for events like parties, weddings, and other celebrations. And how about fixing a Halloween Party at Skansen Lejonet and spook your way to the city.