This ice is as tough as the bare rocks it’s clinging to. No matter how mild or intense the winter is it’s giving us something that belongs to it and it suggests no one can escape from the cold it brings. Not only that, winter is not just snow but ice as well that tends to melt in it’s own time. But when? Despite the staggering spring temperature these past few days this ice seems to be enjoying its stay on the cliff of bare rocks. 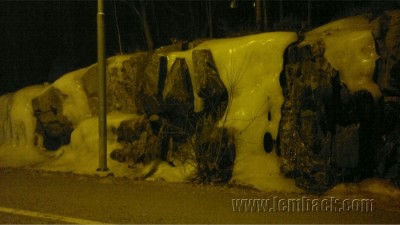 Took this pic the other night and it really surprised me to see the ice not melted yet. I know eventually it will but I just didn’t realize it would still be there now that it’s relatively warm like 5°C-7°C in some days. It looks pretty cool on the bare rocks though.