If there’s a social media site that I consider myself totally hooked on, it’s nothing else but Twitter. I update my status on it a couple of times everyday than my other social media accounts. I find Twitter more engaging and I feel like I know what’s happening in the world by reading other people’s tweets. Since I tweet a lot, I am also constantly looking and trying different Twitter apps for my PC and mobile phone. My recent find was the MetroTwit for Windows. I have it installed in my laptop but I have another Twitter client in my PC. I love using MetroTwit though. 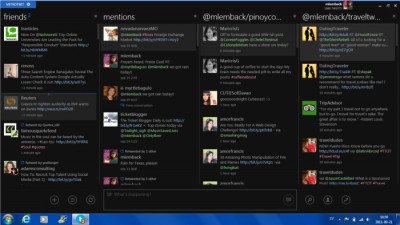 This is how it looks in my 15.6 HD LED LCD laptop. I prefered the black background than the light one though. I like its easy and smooth UI, especially checking my other lists’ updates that are not in columns. The ability to view updates from my lists before adding them in my columns is a good feature that I couldn’t find on my other Twitter client. What’s missing, however, in MetroTwit is the option for the users  to schedule tweets. Or I’ve just overlooked this feature. The other downside is that it’s still in beta version but fingers crossed the developers will update this to release version. Anyhow, it’s too good to be true for a beta release and I’m loving it!