Unfortunately our Easter Break does not fall on the Easter Week since it starts on the last week of March this time.  We usually have school break on Easter if it falls later than March.  This is because we normally have Winter Break in February so having another break after this month will give us shorter school days in between. This means I am working to death this Holy Week but will be load free from Friday till next week.  Yipee!

I remember one Holy Week when hubby and I had a trip by car to some cities in Europe.  It was easy to drive on the roads with less cars and less traffic to mind.  The trip was as smooth as a smooth sailing ship.  I have known that many people observe Holy Week in different ways.  Here we normally have lots of eggs and candies in egg boxes, colored eggs and believe it or not, witches (påskkärringar in Swedish)!  I don’t want to elaborate more on this cos I have not followed this belief religiously.  I am Catholic and the countries in Europe that’s more likely to have the same Holy Week observance as mine will be Spain and Italy.  The farthest city that we could drive in that trip was Barcelona, Spain.  Awesome!  I wish we could make the same trip again.  Here are some pics we took.

The unfinished La Sagrada Familia. It is said that this church was built in 1882 but until now it is far from done.  It has been planned that this church will be finished in 2026!  Tourists flocked in and out of this 170 meter high church. 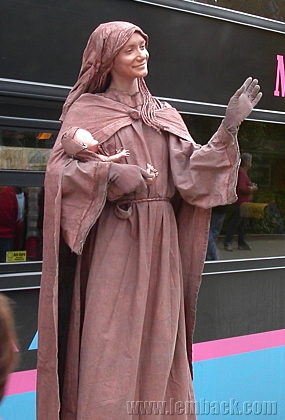 The living Mary in Barcelona?

I enjoyed looking at this living Mary who waved to people, smiled and froze like a statue.  One moment she was facing there, the other moment here.  I came close to her while hubby took a pic of me with her in the background and after that she signalled at me to stay and she picked something in her little pocket.  She gave me a little souvenir! It was easy for me to understand the signs or sign boards everywhere but when I listened when they talked, I was completely lost.  Ayuda!