I blogged about this mobile phone sometime in spring with a title which I didn’t noticed read like I was talking about something green-ish. But Jessie and Amor were quick to react about it and made my eyes wide in awe and immediately put a hyphen in between. That ended the silly title I thought was sensible, lol!.

Anyhow, Sony Ericsson had published this phone among those upcoming models at that time but it took until the last quarter to finally launch it in the market. Was it worth the wait? Nahh! I thought I would want to own one but after finally touching and gripping it, I thought it’s a phone too much to me. But hubby, after my heartfelt recommendation and insinuation, didn’t change his mind to have one. He wanted to have a phone that has a better reminder functionality. 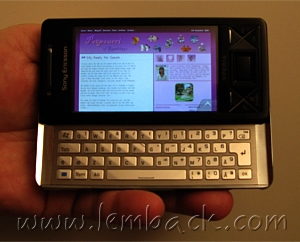 He’s got my blog in his hand!

He has had this for more than two weeks now and it took days before he learned to deal with all the functions and buttons. He even got mad about clicking every buttons and not getting what he wanted. But patience was all he need to learn all and now the phone works as he expected. Wheww! It would be my fault if he totally disliked it. I’m glad he loves his new mobile phone now. 😉 But me, I’ll stick with my W910i for a while. 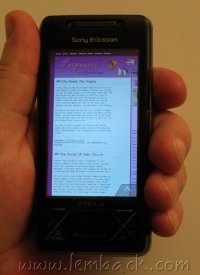 Included in the package was the 4 GB Sandisk Memory Card. Big enough a space to store images and sounds. It’s easy to connect to a wifi, too. Hubby has tried to connect it to our LAN network and it works fast. You can choose between 3G and Wifi when on the go. The GPS system is quite impressive, too. So far, this is the short review I can give about this Xperia X1, just in case you’re hunting for a mobile phone as a gift this holiday season.