I’m pretty sure you all know about collecting stamps or like most women do, collecting bags or shoes. I do have quite a number of bags but it’s not something I would have thought of collecting. Sometimes we meet people who have the hobby of collecting things and it so happened that I’ve met one and this person happened to be my boss. She invited us to her place nearly two weeks ago and it was inspiring to see her collection of teapots. So far, she has collected 54 of them. I was wondering how she managed to find a space for them but she has built or has let somebody built a long shelf on the wall and placed the teapots on. Some of them are placed in bookshelves. 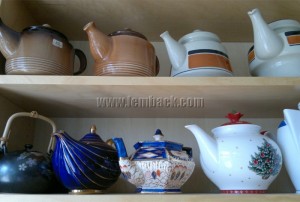 She told us how it all began and I was amazed the same thing happened to me, though not teapots but some kind of a weird collection, if I may describe it. She said it started when somebody gave her a teapot as a present, then followed by other persons and the rest is history, until she’s found herself collecting this thing. Some of them she bought from different places she visited. It’s uncommon type of collection, isn’t it?