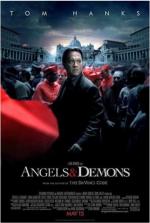 I can’t wait to watch “Angels and Demons”, a film based on the novel by Dan Brown, the same author of The Da Vinci Code.  I’ve been waiting for this after I read the book about a year ago.  Today is the  premiere showing of the film but I can’t go watch it cos it will be late in the night and I need to be early for work the next day.  The sleepy head in me has a hard time getting up in the morning.  Anyhow, this film seems less controversial than that of the Da Vinci Code despite the involvement of the Vatican City and religious personalities in the story.  I remember the Da Vinci Code was banned in the Philippines and pulled up from theatres after a day’s showing.  I didn’t know if the ban was revoked later or something.  I’ve watched that film and I should say I didn’t become less Catholic after that.  I hope this will not be the case for the “Angels and Demons”.  Nonetheless, the actor, Tom Hanks hasn’t been a disappointment when it comes to movies like this.

I told hubby I wanted to see this movie with him since he also had read the book.  But it’s quite a problem for me cos he doesn’t like going to movies.  As a matter of fact, we haven’t gone to movie theatres together since time immemorial, hehee.  He’d rather wait for the film on dvd.  How can I persuade him to go with me.  I was thinking it would be my chance to watch a film at the VIP lounge of the three year-old movie theatre (Bergakungen).  I went to this theatre once with my friend but we took the ordinary lounge.  The VIP costs more than the usual lounge.  I heard that the lounge has it’s own bar where the guests can sit and enjoy some drinks and snacks an hour before the show.  And that one sits comfortably on a leather armchair inside the movie room or whatever it’s called.  Anyway, it’s fully-booked for today’s premiere.  I still have to convince hubby to come with me perhaps on the weekend.