It has been about two weeks now since hubby started fixing our laptop.  It was working fine before he took it on the  bed when suddenly the Internet stopped working and it didn’t reconnect for some reasons.  That’s what he got for being envious of me blogging while lying in bed.  That day was supposed to be a complete day of rest for both of us but we ended up having each one’s laptop in the bedroom.  Try to imagine a lying position with a laptop and describe the rest.

I must admit I am living with a compulsive computer nerd among the nerds on earth.  Annoyed by the laptop’s obscure defect, he got up and as compulsive as he is, he ordered online a HD to replace the one in the machine.  That machine has the built-in Vista Business when we bought it then he decided to install XP instead.  He said he didn’t like Vista as much as XP though.  Huh!  Think about when Windows Vista was to be realeased,  I remember he even did a countdown as to when so he could purchase it the moment it would be out.  He did purchase as expected and again, as compulsive as he is, he bought the one with the 64-bit system.  He installed it on my PC and guess what – not all programs were compatible with that version that time.  Although he managed to fixed it to run on 32-bit browser, he didn’t like the way it should be.  So after running it for a couple of months, he shifted back to Win XP while the other was packed back.

Back to the laptop, he installed XP on it and thought it would work the way he wanted.  It took so much time to install it because of the Service Pack updates but once he’d done, he noticed that the built-in bluetooth and fingerprint recognition didn’t work.  He wanted so much the bluetooth functionality for the mouse to keep the usb-port.  His dissatisfaction led him to reinstall Vista.  The network system caused some problems so he reformatted the disk and reinstall Vista again.  Finally, everything seems working fine now.  Though some programs need to be installed.  He mentioned about the upcoming Windows 7 and I know exactly what he’s up to next. 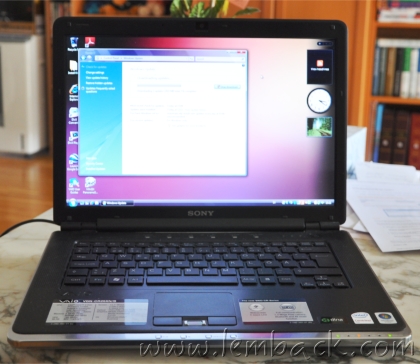