We didn’t have an all-night New Year celebration here in Catania. After a short trip to Taormina, hubby and I stayed in the hotel and waited for the 12:00 o’ clock boom-boom-boom! I saw a brief fireworks display from our balcony and that was it. I went to bed when it went quiet. The next day, we drove to Siracusa as planned. It’s another city here in Sicily but it’s farther away from Catania than Taormina so we started the trip earlier. Geez, how we drove through several tunnels! Long and short tunnels are built just through the mountains. 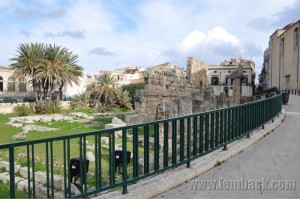 The remains of Tempio di Apollo

Our first stop was at the old city centre of Siracusa on Ortigia island. I can’t tell much about this structure though when I saw it, I thought it was very old and meaningless. Then I spotted an information board on the side of the fence and I gazed. I didn’t understand what’s written on the board but the text “Tempio di Apollo” was enough explanation to me what this strange structure is about. According to hubby, Sicily belonged to Greece and Siracusa was the second biggest city of Greece. And this Temple of Apollo was built by the Greek in about 600 B.C. 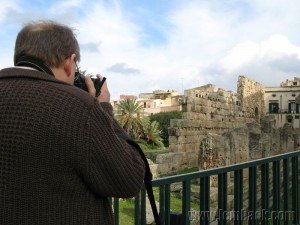 My Apollo taking pics of another Apollo

Hubby’s knowledge in the history of world is sharper than mine. I remember studying about Greece and even Sicily in my world history subject in high school but I don’t recall anymore most of them. Poor me… 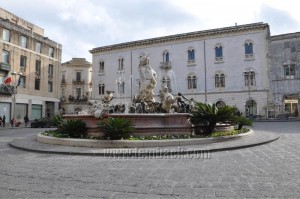 Another interesting plaza in Siracusa which reminds of the Greek origin is the Piazza di Archimede. You, mathematicians, phycists, engineers and astronomers should know about the principles that Archimedes had contributed to the world. I’d like to write more of my observation on this structure in my future posts. I have to stop now cos we need to pack our things for our trip back home tomorrow. Buonasera!