I am quite selective when it comes to Spanish food. Even my husband is not keen on Spanish food. But before we went to Málaga I searched the Internet for some local gastronomy it is known for. One dish that appealed me most was the grilled sardines. I did order it once we were at a resto by the beach. Unfortunately, they ran out of sardines. Surprisingly though Málaga and its neighbouring provinces have cosy restaurants to dine in which offer both local and international cuisine. Much to our surprise, all the restaurants we’ve been to had given us the satisfaction way beyond our expectation. Feast your eyes on the dishes below.

La Pappardella (Estepona)
Since it’s an Italian restaurant we preferred to try its pasta for the main course. Everything we had in this restaurant was of Italian savour and style. Though we were not so hungry we managed to fill our stomach with this three-course meal. 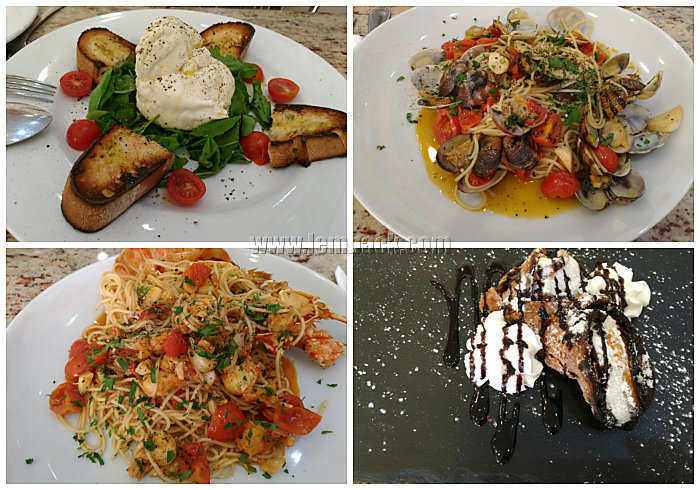 The starter is a white cheese or something that was recommended to us by the chef. It was nice but we couldn’t eat it up. I guess because we’re both not into white cheese. Hubby had the Spaghetti Vongole. The first time we had this dish was in Sicily and after that we would always want to have it in any Italian restaurant we’d dine in, if it’s in the menu. This time, though, I tried another variant of seafood in my pasta – Spaghetti Lobster. For our dessert, I had a warm and delicious brownie (not in the picture) and hubby had the exquisite Canole.

Restaurante Don Diego (La Marina, Sotogrande)
While walking along Sotogrande’s Marina we found restaurants in a row and it was difficult for us to choose which one should we try. We wanted a little quiet with few people inside. Since it was quite early in the afternoon we found a few restaurants that were empty. We picked this empty restaurant and had a couple of cold drinks then we decided to see the menu. We both like sushi though it’s not the kind of dish that we so eagerly desire. 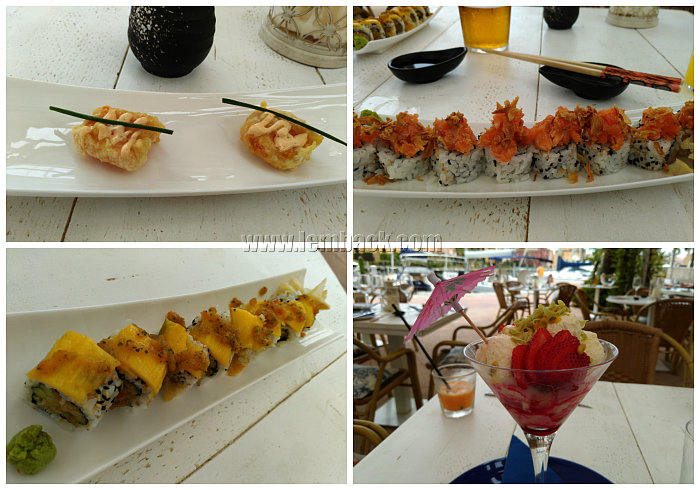 We did not order something for a starter but we were treated to a nice looking something that tasted that of a shrimp. Anyway, we ate it with appropriate gusto and we liked it. Hubby had the one with mango while I had the one with salmon. We tasted each other’s sushi and we found both to be so delectable. I particularly like the bite-size portion sushi like this one as opposed to big cut portion. Communication was not easy in this restaurant because it seemed all the waiters only spoke Spanish. When we ordered the cream mousse for dessert we thought they did not understand it at all because we got a kind of orange drinks. When the mousse finally came we then realized the orange drinks must have been complimentary.

El Paseo (Marbella)
This restaurant serves Italian, Spanish and Mediterranean dishes. After a walk in the sun we got a hankering for cold drinks. We went inside the restaurant and had a few drinks, then we looked at the menu and we decided to have small dish only. 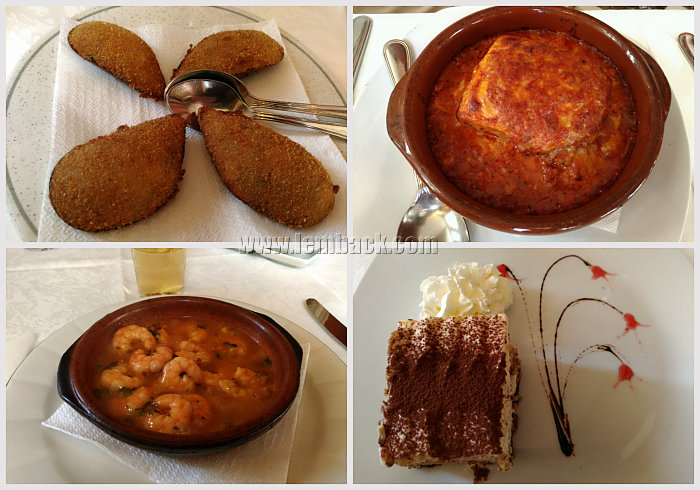 I opted for a stuffed mussels from the menu which I did not have any idea what it would look like. Hubby chose the Lasagne from the menu. The stuffed mussels was all right. It was not quite filling for me so I ordered another dish, the Gambas al Pil Pil, also I didn’t know what it was. I know for sure that gambas is prawn or shrimp. When it came at the table it was sizzling! Without doubt, it was the best prawn dish I’ve ever tasted. It was served with hot bread too. For dessert we both have tiramisu, which didn’t only look appealing but delicious as swell.

This is how the sizzling Gambas al Pil Pil looked when it was being served on the table. Muy caliente!, warned the waiter.
We also went to other restaurants and cafés but we would only sit for some drinks or ice cream to chill out.