While we are here in Italy we might as well learn a few words in Italian. Hubby bought a DVD-learning course for Italian a few months ago but I didn’t have time to listen to it. He, on the other hand, had sneaked some time to listen and learn quite many words. His passion for languages has been an advantage in most of our travels. Anyhow, before I go further in my story-telling, let me greet you all a Happy New Year from Sicily! And yes, we’re still here waiting for the New Year celebration. I’m hoping for fireworks display, if there’s any. 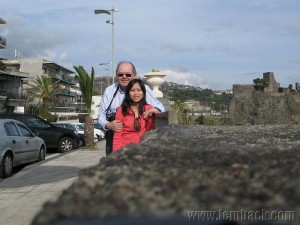 Sicily comprises an autonomous region Italy and it is the largest island in the Mediterranean Sea. Catania is one of the cities of Sicily, where we are staying now. Since it’s not that far to drive to neighbouring cities, we decided to tour around and started driving today. We drove to Taormina where tourists normally flock because of its beautiful beaches and classic structures.

Driving to Taormina was breath-taking. It felt like climbing up the mountains on wheels. Italy is undoubtedly mountainous! I remember the first time we drove from Sweden to the northern part of Italy, it was like going down to stairs of mountains. And Taormina is so high I didn’t dare to look back and see how high we had driven already. Stupefying I should say. Then we drove through another city called Messina. We took a shopping trip to Etnapolis again before we headed back to Catania. What could I write more. Hmm, there would be more after we drive to another city. Until then…