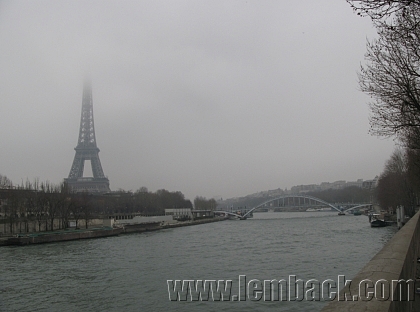 Did you think it was the ET you saw in a movie?  No, it’s just the Eiffel Tower I took a couple of months ago.  Besides, who would ever believe that ET’s exist here on earth.

It was quite foggy and a gray day so it was perfect to capture the Eiffel Tower across the la Seine canal.  With its height of 324m, it doesn’t normally look taller like it’s touching the skies.  But with the fog around that day, it looked as if it was reaching the skies, peeping through for miracles above. It was what I thought, anyway.

It seems to be saying perpetually; ‘I am the end of the nineteenth century; I am glad they built me of iron; let me rust.’ … It is like a passing fool in a crowd of the University, a buffoon in the hall; for all the things in Paris has made, it alone has neither wits nor soul.
(About Eiffel Tower)