Sometime in 2005 while enhancing my pursuit to layouting my website, I came across this new script or language or whatever, called CSS (I don’t remember how I found it).  CSS stands for Cascading Style Sheet and is used for adding style to web documents.  When I asked my hubby if he knew about it, he said he did but didn’t thought of learning it.  He finds it easy to work with HTML, anyway.  Through the web’s many resources about CSS, I started using it first with the fonts, because I found it exertive to determine the font style, size, etc. in HTML codes everytime I would write a post in my site

In the summertime of the same year, my hubby purchased the Macromedia Dreamweaver, one of the most popular web editor then.  So, I said goodbye to Frontpage and started using Dreamweaver instead.  Later, I discovered how easy it was to work with HTML and CSS with Dreamweaver.  Plus the Dreamweaver Bible with CSS helped me understand how to work with CSS styled HTML.

Not long enough, after spending more hours in front of the computer and staying up to the wee hours at night, I had my CSS styled website uploaded.  And soon I learned how to style the tables, borders and images, too.  It was fun and it kept my mind active as I think about how my site should appear.  Below is a screenshot of my first styled webpage. 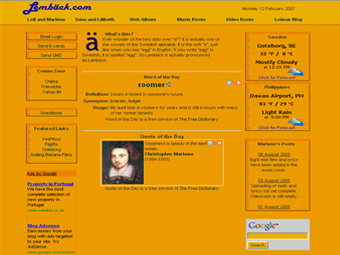