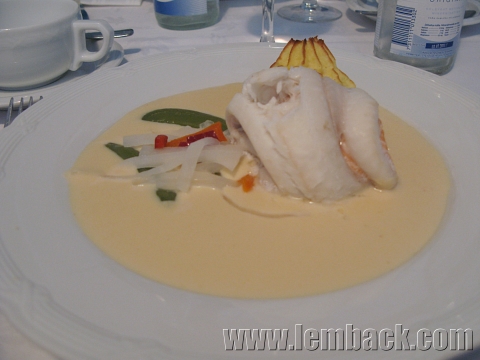 I had this fish soup when my colleagues and I were out for the yearly field trip.  This creamy fish soup with mashed potato on the side was such delectable for lunch.  Too bad, we only had a portion each or I could have taken three rounds to gorge myself with this.  Normally, I prefer rice to any dish but this kind of soup goes well without it.

I don’t know about making fish soup but I saw how one did when hubby and I were at our friend’s house.  I saw that he cooked the fish first with some spices.  When it was done, he let it cool for a while before straining and squeezing the fish to make sure it’s dead, lol!  He was like squeezing it to get the remaining juice.  And what did he do with the torn, mutilated and mashed fish?  Threw it away.  Then he brought the pot of soup to a boil without the poor fish now, adding more spices and especially cremé fraiche.  It was delicious!  But I would prefer it with bits of the fish so that it would look like a real fish soup.  Just like the creamy fish soup above though the fish is whole.