I don’t know if there’s anyone on earth who doesn’t know how to boil eggs or hasn’t learned how to. Even for a non-cook like me, boiling eggs is piece of cake. I don’t recall learning about it from school but I owe this simple knowledge from my mother who would either boil or fry eggs in the morning when I was living with her. Little did I know that setting a timer in boiling eggs was important since my mother didn’t do it as far as I can remember. The first person I knew who set the timer in egg-boiling is hubby. I don’t remember the last time I boil an egg since hubby always does this whenever we like eggs for breakfast. 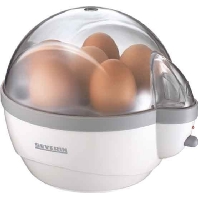 Speaking of breakfast, eggs are always present on the table even in a hotel breakfast treat. The pick-what-you-like-breakfast buffét is what we like the most and everything on the table is just there waiting and begging to be chewed up. In our previous travel at the hotel we stayed, I was surprised to see an egg cooker or egg boiler, as it’s called. Hah! I had no idea how this thing would work for my egg. Should I boil my own egg in this? How? I have seen many of these in the stores but I haven’t considered buying one. Though I bought one for my mother a long time ago but I haven’t even asked her about it. A man who would also want to boil his egg asked me how many minutes. I didn’t see a timer so I thought, should I count the minutes myself, too? Considering my lack of know-how on this boiler, I believe I can still live without it. I have hubby who could boil my eggs for me.