I was browsing my pictures folder to look for the barbecue photos I took a week ago. I didn’t find them so I thought they’re still on the camera. I was closing the folder when my eyes got stuck on the photos I took of the royal wedding on tv. I didn’t take many pictures of that event but video clips that almost gave me sore arm afterwards. I was more excited to watch my videos when I uploaded them in my computer and when I saw this pic a while ago, I was amazed how clear it was and wish I should have taken more. 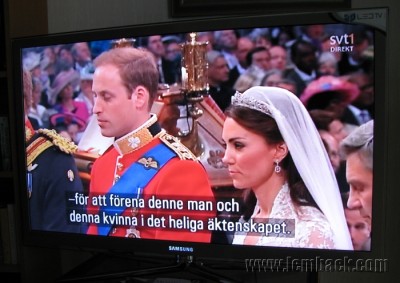 watching the royal wedding on a LED TV

I’m not going to write about the wedding as I know majority watched, read and knew about it already; maybe more than I do. Anyway, I was complaining about our old TV and I finally got rid of it when we purchased this new one in the summer of last year. I missed watching the Swedish royal wedding on this tv though. I’m not tech-savvy so when I told hubby I wanted a flat tv, I wasn’t thinking of the quality, specs or features but bluntly flat. It was unknown to me that he was waiting for this LED technology. I don’t know much about LED, LCD or Plasma but hubby does so I leave them to him, nonetheless, I’m totally flabbergasted and delighted of this LED tv.