While browsing the old images folder in my other computer I found pictures from our previous travels apparently taken with a film camera. I couldn’t help but admire the architectures I captured while in the car with hubby driving around the place. I remember we stopped by and stayed in a hotel in Munich and the next day we went to The English Garden. Then we drove around and I was busy taking photographs while the car was running. Incidentally, I captured structures that I didn’t know what they were all about, like the images below. I just learned about it after searching and I wasn’t mistaken when I thought it was in Munich.

The Theatine Church at Odeonsplatz, Munich

It’s the Theatinerkirche at Odeonsplatz in Munich, Germany. I thought for a while it’s a theater basing from its name. Yeah, what do I know about the German language, anyway. It’s a Catholic church, a baroque-style architecture that was inspired by the Roman Catholic Church. Looking at the picture, I couldn’t tell it’s a church maybe because of the absence of a cross, or there’s probably one but just couldn’t see it. The color is relentlessly attractive apart from its captivating structure.

I also learned that the place is called the Odeonsplatz in central Munich. I would love to visit the place again as it came out while I searched for the name of that building that there are a lot of remarkable architectures in the city. 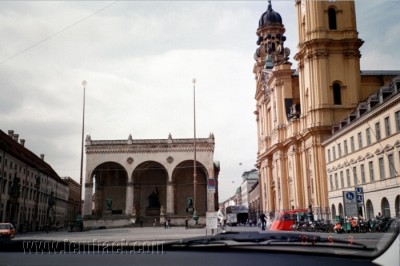 The church and oh, what is that, at Odeonsplatz

I couldn’t find the name of the image below. It looked like a place for demonstration or something. It’s also at the Odeonsplatz though, close to the Theatinerkirche. 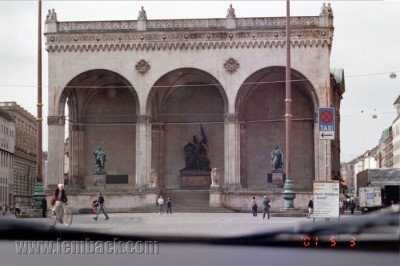 Not bad for a film camera at the time even when taking pictures from the car. I remember we bought our digital camera a year and so after this travel.