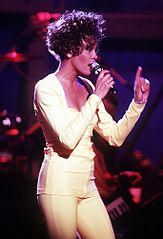 I’ve always been so musically romantic on Valentine’s Day and I’ve presented some songs that give meaning to the celebration. This time I want to play this song of Whitney Houston not for the sake of the heart’s day but to give tribute to her undying contributions to the music industry. All The Man That I Need is the only music of her that I have in my PC and mobile phone playlist. I played this song the day before she died while I was trying the lyrics app I downloaded in my phone. The next day I learned from Twitter that she has died. I though it was another celebrity death hoax but it was not. So sad that it was so true.

I don’t want to recall the last few years of her life prior to death. Instead, I want to reminisce her early life as a singer when she captured everyone’s heart with her songs of love performed and her amazing voice. The one true artist who could sing, dance and act. But her voice was the most distinguished that no one could ever sing like her. This song, All The Man That I Need, is just one of Whitney Houston’s songs I like. It’s quite right to sing this to someone we love, especially on Valentine’s Day. Listen to it and to Whitney’s once spectacular voice.

All The Man That I Need (Whitney Houston)

And in the morning when I kiss his eyes
He takes me down and rocks me slow
And in the evening when the moon is high
He holds me close and won’t let go
He won’t let go.

Watch the video on YouTube: All The Man That I Need