It was my husband’s idea to drive to Vinci during our summer road trip. He had read about the Museo Leonardiano in Vinci and he’d hoped to see some original sketches of Leonardo da Vinci’s paintings. Vinci is a small town in the region of Tuscany, Italy so a one-day visit was enough. It was quite an upland drive but we were lucky it was a real warm day. One problem we met though was finding a parking space. The space we found was a bit far from the museum but it was a nice day for a walk. 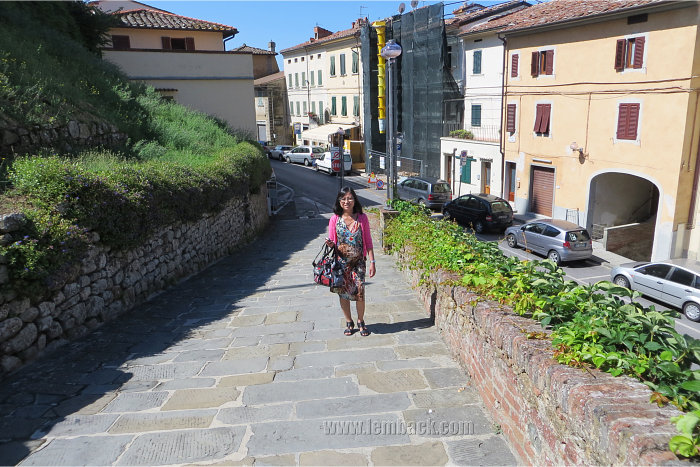 Just a walk to the hill where the museum is already offers an interesting view of the town. It’s clean and quiet and I got an impression of being a laid-back town.

I thought we could only find the museum up there but fortunately there were a lot to see around. Anything and everything that’s about Leonardo da Vinci, like this church where he was baptized. We went to see how it looked inside. It seemed that we were the only visitors at the time though. 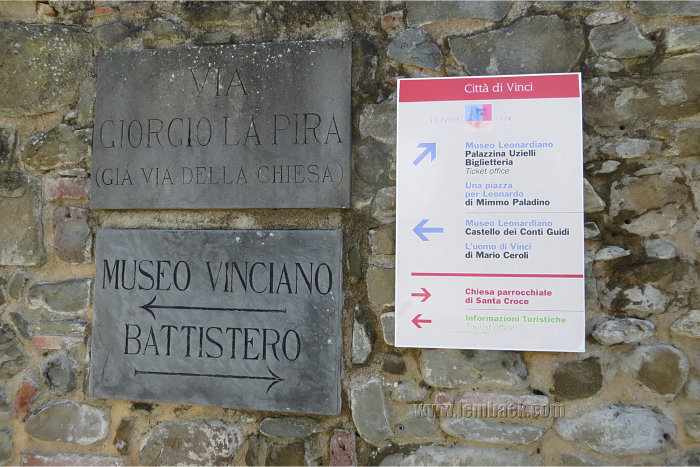 When we reached the museum we saw quite a number of tourists but it wasn’t jam-packed. Although it wasn’t allowed to take pictures of the things inside the museum we managed to sneak a couple of selfies. Lol! Hubby was a little disappointed because he expected to see original paintings of Leonardo’s Mona Lisa or the Last Supper but what we saw was all about his machines or sketches of machines. It was surprising to learn that Leonardo designed a wooden bicycle in his time. In the website there is, however, a scheduled exhibition of Leonardo’s original paintings. 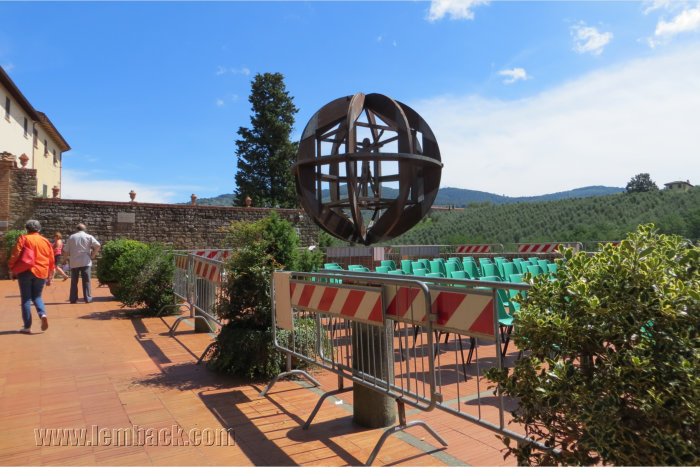 The first time I saw this Vitruvian Man was in the film, Da Vinci Code. It’s in the outer section of the Leonardo Museum. 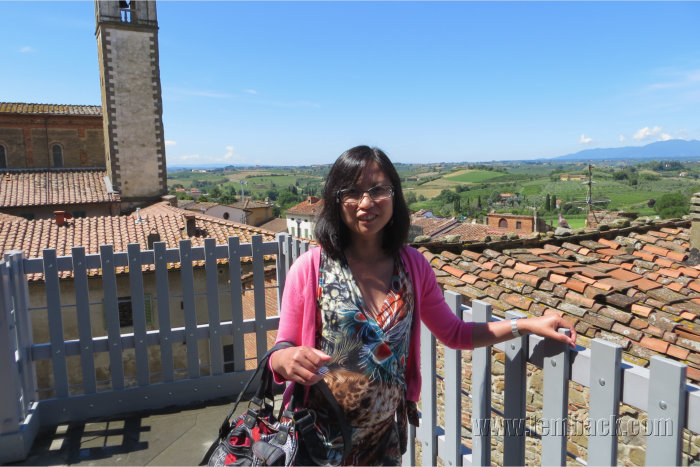 We took the lift to come up to the Tower. I admired the view of the landscapes and those old tile roofs. It’s beautiful up there! 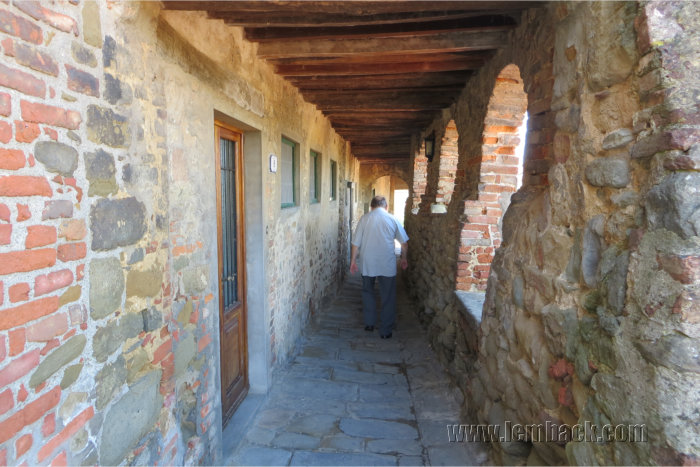 On the way out

We had lunch at a restaurant just across from the road where we parked the car before we headed to another significant place of Leonardo da Vinci. 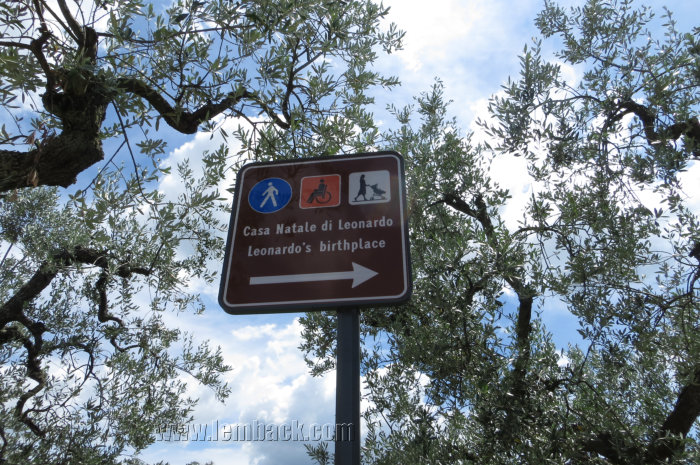 Another upland drive, Leonardo da Vinci’s birthplace is located outside the town. It looked like it’s surrounded by olive groves. 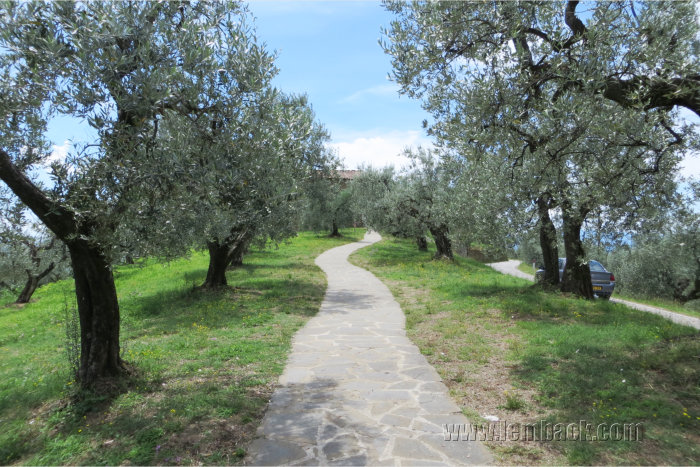 And another walk to the birthplace of Leonardo, which is a farmhouse. More olive groves along the way. It felt like it’s a haven of serenity. 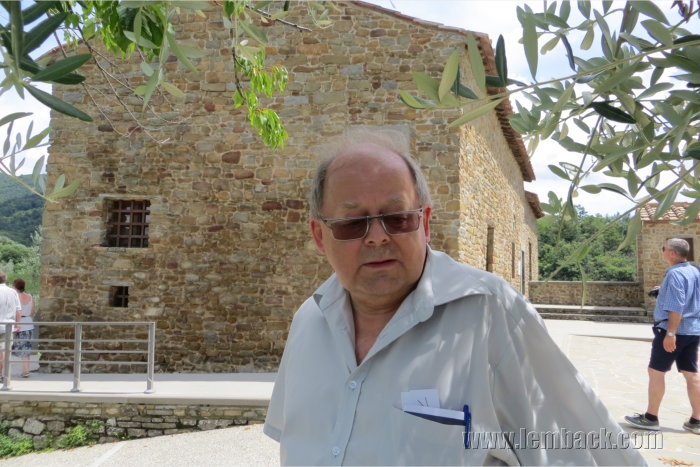 There’s a virtual itinerary of Leonardo’s life and a life-sized hologram of Leonardo telling about his life, among other things to see in the house. Again, I said we were lucky it was a warm day but later that day when we were at Leonardo da Vinci’s birthplace it became too warm that we just wanted to leave and find a cooler place to stay. As you can see scorching hot was evident on hubby’s face.