What happens when you don’t say “cheese” to the people you’re taking pictures of? And those people don’t realize that your camera’s motive is them.  A stolen shot is basically taking pictures of people you don’t know and that they don’t know you’re taking pics of them. In the case of the picture below, I know these girls and they know me (we’re friends, in other words).  But what made it a stolen shot was that they didn’t know I was clicking the camera without warning them.  I didn’t even know it would come out like this.  My hands were uncontrollable the first time I owned a digicam. 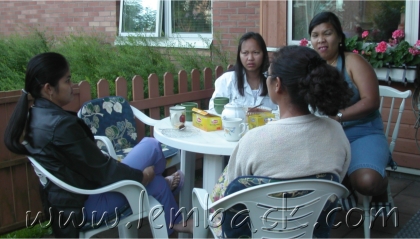 I took this pic a long time ago when we visited a friend (one of the girls in the picture). After lunch, we had tea and cassava cake. But I’m sure it wasn’t the cassava cake that made their faces, hmm, sour (?) I would want the two girls in front to glance back at the camera a bit so I could get a different angle of them, instead of the traditional face-to-face pose. But something went wrong and I accidentally triggered the camera’s button.